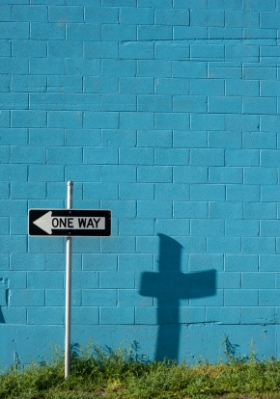 Though many have tried to ignore or explain such statements away, it seems clear from the context that Jesus claims that He alone provides the one and only way of salvation.  Yet this “extreme exclusivity” goes directly against the grain of our global and relativistic sensibilities.  Who, in this day and age of religious and cultural plurality, could make such an audaciously narrow and arrogant claim?

It is important to remember that the society of the first-century Roman Empire was equally, if not more, pluralistic than the contemporary world in which we live.  Jesus’ claim to be the only way to salvation would have offended pluralistic Roman sensibilities as much as any postmodern thinker of today.  In addition, the conservative Jewish community of the first century did not miss the fact that the human person, Jesus, was making these outrageous assertions.  In fact, they condemned him under the charge of blasphemy since He, being a man, made Himself out to be God (John 10:33).

Jesus, through this one statement, offended the liberals and the conservatives, the exclusivists and the pluralists, in a single breath.  Who would say such an unpopular, polarizing, and dangerous thing unless it really was the case?  After all, it wound up getting Him crucified on a cross.

But this is where His resurrection becomes so glorious and important.  The fact that Jesus did rise from the dead concretely confirms the claims He articulated about Himself.  Only God incarnate could make such an outrageous claim and then prove it to be true through the prediction and fulfillment of His own return from death to life.

In fact, it was for this conviction that His followers risked their very lives so that the gospel of Jesus would be proclaimed to every tribe, tongue, and people group.  Peter made it crystal clear in Acts 4:12: “And there is salvation in no one else, for there is no other name under heaven given among men by which we must be saved.”

It is this same conviction that compels every follower of Jesus to “go into all the world and preach the gospel to all creation” (Mark 16:15).  Why bother if God could save us and the rest of the world some other—perhaps much easier—way?  But here is where we must come face to face with the reality of God’s truth: there is no other way.  It was this conviction which drove early Christians to not only turn “the world upside down” (Acts 17:6), it drove them to spend—and often lose—their lives to proclaim the name of Jesus to everyone who would listen, knowing that “it is the power of God for salvation to everyone who believes” (Romans 1:16).

Like Jesus and His first-century followers, we too are called by God to share the gospel with everyone as clearly as possible and soon as possible—in season and out of season—whether it makes us popular or winds up getting us killed.  This is Christ’s call to us, to “take up his cross and follow” Him (Matthew 16:25).  Are you truly willing?  Am I?

3 thoughts on “Is Jesus really the “only way?””